MFS are pleased to be a Health, Safety and Wellbeing SECBE Awards 2020 finalist. The SECBE blog 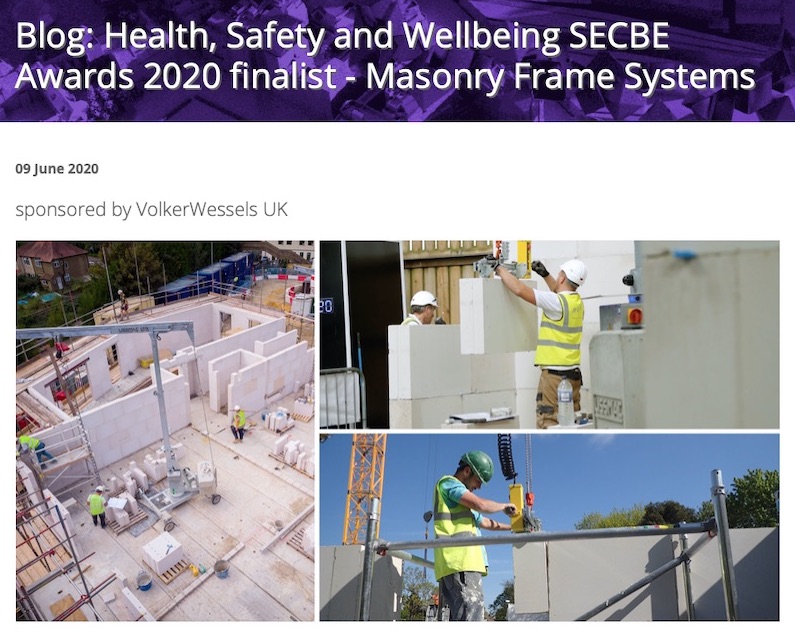 At the centre of this submission is a new (to the UK) masonry block system called the Xella Silka Element system. Working in close partnership with Xella GmbH , Masonry Frame Systems (MFS) first looked at introducing this Modern Method of Construction (MMC) system to the UK in 2016.

The Silka Element system is a large panel, semi-offsite manufactured masonry block system used extensively throughout the continent, with typical blocks (known as elements) weighing up to 220kgs each. The system allows for significant improvements in productivity on site, with the work being able to be undertaken by semi-skilled labour, making it a cost-efficient building system. Most importantly, the Silka Element system is a pre-cut blockwork system, negating cutting and associated dust on site, and by using 110v electric mini cranes to pick up and place each block (element) the manual handling involved is massively reduced. The system is based on a kit of parts, which are purely assembled on site.

Once MFS’ workforce became more familiar and experienced with the system and the mini crane to lift and place the blocks, they reported less fatigue and strain. One of their older male operatives (age 53), who had previously worked as a traditional bricklayer for 30+ years, reacted positively in carrying out this system as he was able to carry out a full day’s work and not suffer the wear and tear of bending and twisting when laying bricks and blocks in the traditional way. He has requested never to return to traditional ways again! In addition to giving the old guard a new lease of life, MFS found that because of the perceived novelty of the system – mini cranes, speed of build, no cutting, no dust and significantly less manual handling – the system has great appeal to the younger generation.

By using this system, MFS has found they have happy teams on their sites, who are able to work safely, efficiently, and produce quality work without physical or mental strain. They are working with Xella in 2020 to get the Silka system rolled out in the UK as an MMC, with the Health, Safety and Wellbeing attributes being at the forefront of all discussions.

We would be thrilled if you could take a moment to vote for this MFS entry on the SECBE website. Click here and simply scroll to the bottom of the page and click the People’s Choice icon to vote and share. Thank you!

Considerably reduced manual handling when working on site using the Xella Silka Element system, as the blocks are lifted and placed by the 110v Lissmac mini cranes.

As the Xella Silka Element system uses pre-cut to size blocks there is no need for any cutting of blocks on site so there is no harmful dust produced, so dust control is eliminated.